How often should I weigh myself? Daily, weekly, never?

By Adam1 December 2020No Comments 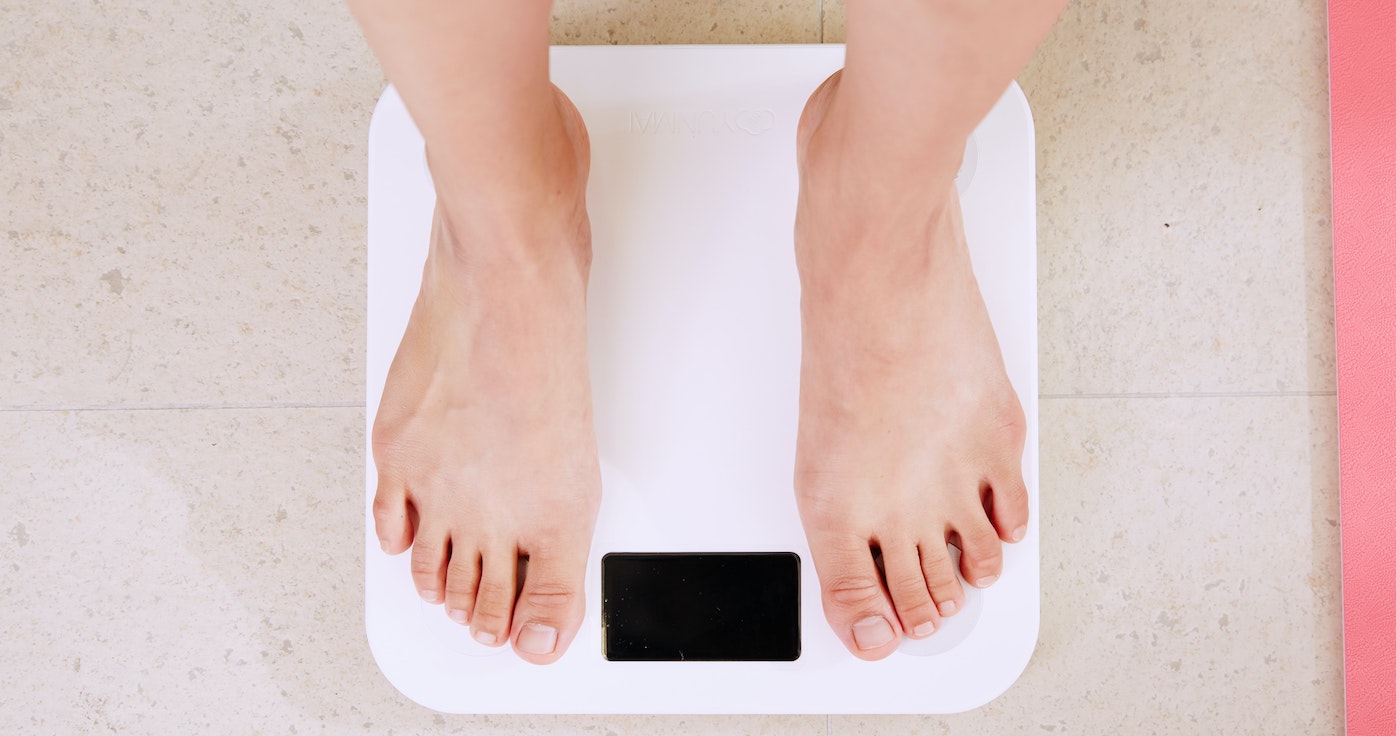 Use the scales correctly regardless of frequency

Regardless of how often you weigh, correct usage of the scales is vital. Over 15 years of PT we have seen scales produce big differences just because they were moved a few inches on the floor, used at a different time of day or even before or after a workout. So you should always:

How often should you weigh?

A growing body of evidence suggests that weighing daily is more successful than a weekly weigh or less. There seems to be what scientists call a “dose-response” relationship between getting on the scales, weight loss, weight gain and prevention of weight gain. The most recent studies show that:

There have been many more studies on the topic in the last decade than previously. A study by Healthworks in 2014 followed 1,222 people over a two year period. It shows not just a clear link between daily weighing and weight loss success, but also that the differences were large – including less weight gain for those who were eating normally and not trying to lose weight. The daily weigh-in people lost an average of 4.5kg while the weekly ones lost only 1.5. Those that didn’t weigh at all lost less than 0.5.

Change in weight as a function of the frequency of weighing for healthy weight, overweight, and obese participants. Excerpt from Pacanowski et al. (2014) – Daily Self-Weighing to Control Body Weight in Adults: A Critical Review of the Literature. SAGE Open

In 2013 Steinberg et al published their research in the journal Obesity titled “The Efficacy of a Daily Self Weighing Weight Loss Intervention Using Smart Scales and Email”. It too found that frequent self weighers enjoyed a loss of 6% of body weight over 6 months, opposed to only 0.34% in those who weighed daily.

In 2016 a study by LaRose et al also found similar results in favour of daily weighing. Young adults – mainly females – aged between 18-25 and with a BMI of 34 were followed for 3 months. Those that weighed daily lost an average of 9.2lbs or 4kg. Those who weighed weekly lost just 4.5lbs or 2kg. 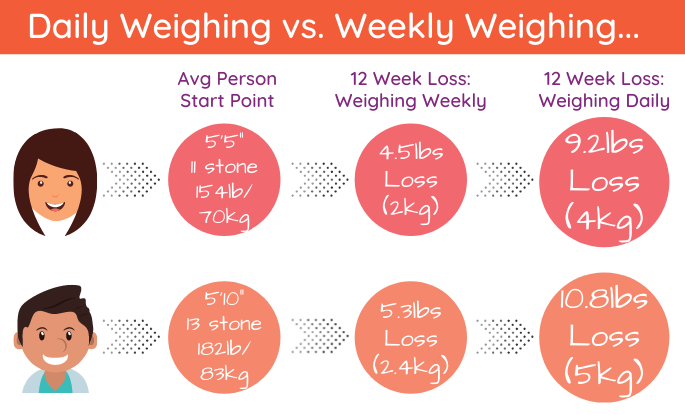 In fact, a detailed analysis of 17 studies on the topic showed that in every trial those that weighed more often (more than once a week) had greater weight loss, less weight gain after dieting, and better prevention of weight gain on those starting at a healthy weight. There was also a marked “dose-response” between the frequency of weighing. So the more often people weighed, the more weight they lost.

How does daily weighing help?

Instead of a single, high-pressure weekly weigh, where an increase is likely to make someone give up and head to the fridge for solace, the constant feedback from daily weighing helped people to:

The downsides to weighing daily and how to overcome them

Although the science seems to lean to daily weighing, some might find it daunting. The fluctuation that happens – the scales may be up one morning even if you’ve had a good eating day previously – can be upsetting for some. Adherence can also be tricky, especially if you are busy or if you have to travel a lot and are away from your regular scales.

Although it may be difficult to deal with minor ups and downs initially, nearly all the studies show that the daily system was psychologically easier than less frequent approaches. As time goes on it becomes easier to be philosophical and pragmatic about short term gains.

One of the most interesting studies interviewed candidates who had adopted daily weighing to see how they felt about it: Frie et al. (2020) ‘Analysing Self-Regulatory Behaviours in Response to Daily Weighing: A Think-Aloud Study with Follow-up Interviews‘ published in the journal Psychology and Health. Here’s what they said: 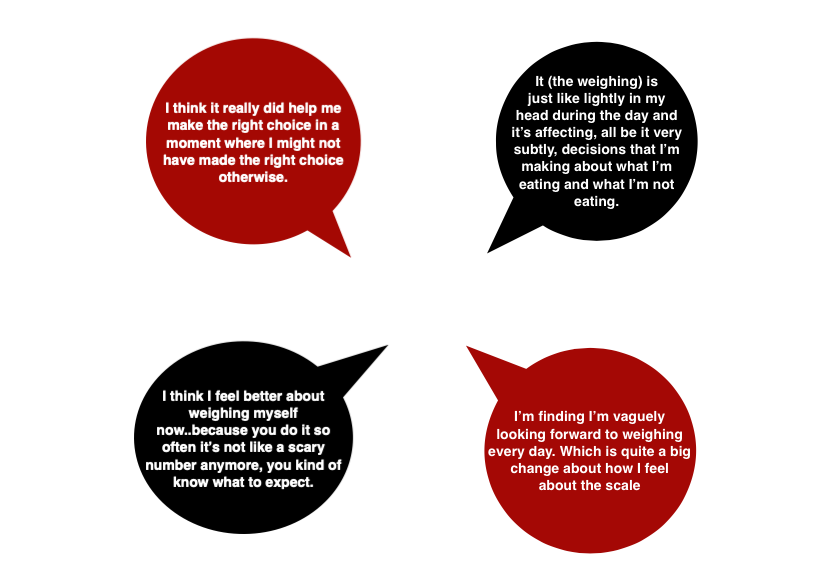 How to understand and deal with daily fluctuations

There are a number of reasons that weight fluctuates in the short term regardless of calorific intake and that have little to do with your overall fat or weight loss. This is why it’s so important to recognise blips vs trends. This is also a reason why daily weighing is more useful than once a week or less. If you only weigh once a week and that day happens to be just at a time when there’s been a non-calorie based fluctuation it can be easy to misinterpret the data and give up. It is also worth remembering that to gain 1lb of fat you would have had to eat a surplus of around 3500 calories over a week.

In most cases, weight stall or gain – despite a deficit – is down to fluid retention. But there are other reasons too.

The importance of recording methodology

How you log or record your weight is also important to stay motivated and avoid any “failure eating”. Good tips are:

Take an average – if you weigh every day taking a 4 or 5 day average can smooth out fluctuations and show the true trend. Even a daily weigh with a weekly average would be good.

Don’t log gains – weigh every day, but only log loss days. For some continued success is the only motivation for continued effort. So see the ups and downs, accept them, but only log the successes.

Use technology – pairing a set of smart scales with an in-phone app will take all the leg work away and adhere to all the points above. Your phone will display a graph with both the daily readings (very up and down) but also with a rolling average to show the overall trend. Perfect to train you to expect daily ups and downs but to look for an overall trend.

But…daily weighing isn’t for everyone

Despite the scientific evidence in favour of the daily weigh, it does have drawbacks for certain people. Anyone with a history of eating disorders like bulimia or anorexia might want to avoid weighing at all. Even for those without  an eating disorder weighing often can lead to:

Whatever approach taken to lose weight, remember that permanent weight loss takes time – max 2lbs a week. It’s important to consider lifestyle change over the long term than hitting a certain weight in the short term. And finally, the benefits of strength, fitness and flexibility can be felt by all regardless of weight.

In-depth reading can be found below.

Pacanowski et al. (2014) ‘Daily Self Weighing to Control Body Weight in Adults: A Critical Review of the Literature‘, Sage Open