Starvation mode – as you know it, fiction

Over 14 years of personal training we’ve heard the “I’m not losing weight because I’m in starvation mode” statement hundreds of times. The theory goes that once a person starts eating too little, natural survival instincts kick in to stop us from losing weight and can actually start to encourage fat storage and weight gain.

But is this theory correct? Does starvation mode exist? Is it why you’re not losing weight?

The unfortunate truth is that the starvation mode that you think is stopping you from losing weight, and even putting weight on, does not exist. There is in fact only one reason a person is not losing weight. Lack of calorific deficit.

The excuses we get as to why someone is not losing weight or has hit a plateau are usually the same. They are both connected to “starvation mode”.

1 – I’m building muscle, which weighs more than fat so that’s why I’m not losing weight. Although I’m losing fat this is being countered by my muscle gains.

2 – I’m in starvation mode as I’m eating so little. My body has gone into emergency shut down and has entered a phase where weight loss won’t happen – I might even put weight on!

Excuse 1 – Although muscle does have a greater density than fat, the rate at which we can gain muscle is actually low – at the most 2lbs a month. This 2lbs would require hours of heavy weight lifting in the gym on an almost daily basis coupled with precise nutrition. For the average client doing 2 personal training sessions a week, it is extraordinarily unlikely that muscle gains are canceling out fat loss on the scales.

The big question should actually be, “what do I think starvation mode is?”

Well, no. This version of starvation mode is a complete myth. If someone is eating fewer calories than they need and is in calorific deficit, they WILL lose weight. Regardless of any other factors. There are reasons why weight loss may plateau and become more challenging over time, but these are not this made up starvation response. Equally dubious is the thought that because you skipped a meal or two, or had a couple of days on very little food, you’ve suddenly entered starvation mode.

Both scientific study and huge amounts of anecdotal data show this to be true. Every properly conducted study where participants were in a calorific deficit for continued periods resulted in weight loss. 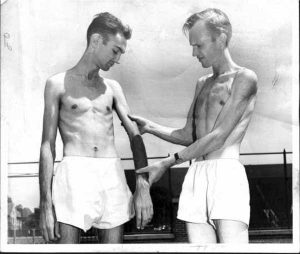 Even in actual starvation studies. The best known is the Minnesota Study, conducted between November 19, 1944 and December 20, 1945. In the study, 36 men were put on a starvation diet of just 1560 calories via 2 meals a day. This amount was then reduced during the study to maintain a deficit of 50% below maintenance calories – the amount of energy they needed to stay the same weight. Everyone in the study lost 25% of their bodyweight and reached 5% body fat. The photo above shows the extent of their – alarming – weight loss.

Their metabolic rates had fallen by 40% (a fact starvation believers cite as why you may come to a point where weight loss is hindered). But much of this depletion came from simple weight loss and loss of muscle mass, as opposed to adaptive starvation response. Only when on the point of death did the participants weight loss taper off. At no other point did they stop losing weight or start gaining weight. By actually starving and continually losing weight they proved that the modern notion of starvation mode doesn’t exist. Thus, we can extemporise that if starvation mode didn’t happen to people actually starving, it won’t happen to the average person trying to restrict calories.

Unfortunate modern history also backs up the Minnesota study. Those found in concentration camps during WW2 were in a similar state to those on the study – dangerously low body fat and continued weight loss to the point of death. At no point did starvation mode kick in to slow their plight.

Example – A client at 100kg comes to us for weight loss. She gets to 95kg relatively easily, but then can’t lose any more weight. She tells us she’s in starvation mode. She doesn’t have time to eat as work is so hectic. She’s on a fitness calorie counting app, and upon inspection, the numbers add up. It appears that she’s eating less than she needs. However, further investigation shows us that she has simply been underestimating the amount of calories she’s been eating; at the same time she has been greatly overestimating calories burned during exercise. This is SO common. “I don’t know why I’m not losing weight, I’m hardly eating anything. I only had salmon and green beans last night. What the client omits is the 2 bottles of wine and take away they had earlier in the week. If you are not losing weight, the simple and only answer is that you aren’t in deficit. Other human factors can complicate matters and make continued weight loss challenging, but they are not the “starvation mode” that people believe is magically keeping them from success. It can be difficult for the person in this scenario to confront their own truth, the non-deficit. But only when this happens can progress start again.

Proof of the myth of this stereotypical starvation response can also be found in an unlikely place – reality TV.

In the US shows like “Survivor” and “Naked and Afraid” place contestants in a simulated struggle for survival. In the latter they have to forage for their own food. Unfortunately, these shows don’t go to their ultimate conclusion (it might be better for all concerned) but at the end of 3 weeks participants have lost from 25lbs to 50lbs. At no point did starvation response kick in and stop them losing weight.

These extreme examples – and the Minnesota study – although proof of the myth also show the dangers of very low calorie plans. Subjects suffer not just physical damage but also mental as well. They are of course to be avoided.

Instead of starvation mode, this might be better called survival response.

We are not machines, and so there are other factors than energy in and energy out at play. But despite these factors, if you are in deficit, you WILL lose weight. They do, however, make keeping the deficit going difficult over time, particularly as you get nearer your goal.

Your body will always adapt to survive. It does not like prolonged and extreme calorie deprivation. It also does not like the omission of food groups, soup-only diets, or cabbage-only plans or any other fad diet. It’s also not keen on excessive exercise (like hours of daily cardio) or indeed a combination of the two. Adaptive responses WILL happen in these scenarios that will make creating and maintaining a deficit harder. Some degree of survival response will happen even in the safe, consistent weight loss that a good personal trainer will guide you towards. It’s just less significant than with an extreme diet. These can be:

Adaptive thermogenesis – slowing of the metabolic rate. As part of its survival mechanism, the body will slow down the metabolic rate a little as we go into deficit. However, this slowdown is only very gradual and not enough prevent someone from losing weight. Only the lack of a deficit will.

Reduction of non exercise thermogenic activity – NEAT. There is less of us after weight loss so less energy is needed to maintain us. So if initially our BMR (basal metabolic rate) was 2,000 calories, around 1,500 a day would get us a 2lb weekly weight loss. But after losing 28lbs, the BMR would fall to around 1,700 calories a day. So for the 2lb weekly weight loss we now only have 1,300 calories to play with. This is why, as we lose weight, constant adjustment is needed to maintain progress. However, at no point does this adaptive thermogenesis stop us losing weight, it just makes it a little harder to maintain that deficit over time. It will also make weight loss a little slower.

Loss of muscle mass – as we lose weight, part of the process is loss of lean muscle mass. The body will break down a small part of our muscles to use for fuel, keeping fat as an emergency back up. Again, at no point is this enough to stop weight loss. It just means that we need to include strength training in any good weight loss programme.

Hunger and cravings. Even when not trying to lose weight and being well fed, our powerful inner chimp is greedy, and wishes to ensure our survival by craving fat and sugar. In calorific deficit, this will be exaggerated, especially in any crazy very low calorie fad diet. This is where calorie tracking, support from friends and family and a personal trainer will be really helpful. Breaking weight loss down into small, manageable time segments will also help, as will an occasional “week off” where you can revert to maintenance calories. 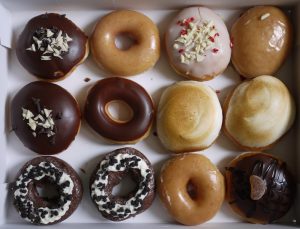 Starch and sugar are also a factor. High levels of starch and sugar, with the corresponding high levels of insulin, will encourage storage of fat even in calorific deficit. So moderation of these foods will help in your weight loss quest. But…if you are still in deficit, then you WILL still lose weight; your shape will just not change as quickly as it would if you were losing weight and keeping starch and sugar low.

But remember, NONE of the above will suddenly stop you losing weight in some mythological starvation response. Only eating more (or the same) that you need will achieve this.